The Arab Music Ensemble's three annual concerts present a wide range of art, folk and popular music from Arab society as well as selected seminal pieces from the historically interconnected areas of Southwest Asia and North Africa. Programs also feature critically acclaimed guest artists whose professional skill and virtuosity add enormously to the performances and to the educational experience of the ensemble and audience alike. 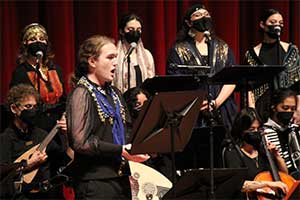 The Cal Poly Arab Music Ensemble and Dance Troupe will be joined by the Morro Bay High School Choirs and critically acclaimed guest artists for its Fall Concert at 7:30 p.m. Saturday, Dec. 3, in Spanos Theatre on campus.

A special feature of the concert will be a collaboration between the Arab Music Ensemble and the Morro Bay High School Choirs directed by Katie Bravante, a 1999 graduate of the Music Department. The groups will perform an adaptation of Joy Hirokawa’s arrangement of “Lamma Bada Yatathanna,” a foremost example of Arab art music.

The critically acclaimed guest artists to be featured in the concert include Ishmael on qanun (zither), Fathi Aljarrah on kamanja (violin), and Faisal Zedan and Keeth CrowHawk on riqq (tambourine), daff (frame drum) and darabukka (goblet drum).

The program will feature contemporary works and traditional genres with roots in the Eastern Mediterranean, the larger historical Ottoman Empire and the legacy of Andalusia, as well as some of the most celebrated repertoire of Southwest Asia-North Africa. Improvisation (taqsim) will also feature prominently in the concert.

Two of the compositions on the program are examples of the muwashshah, one of the oldest continuously performed art-music genres in the world. “These selections are in metric modes of 32 beats per measure and 10 beats per measure and are excellent examples of the rhythmic sophistication that can characterize metric modality,” said Music Professor and Arab Music Ensemble Director, Ken Habib.

Sayyid Darwish, Mohamed Abdel Wahab and Badi` Khayri of Egypt, Fairuz and the Rahbani Brothers of Lebanon, Sabah Fakhri, Omar Al-Batsh and Fakhri Al-Barudi of Syria, and Tatyos Efendi of the Armenian Ekserciyan family of Turkey are some the composers, poets and artists whose works will be featured in the program.

The Arab Music Ensemble is an orchestra and choir with vocal and instrumental soloists. Its membership represents a wide range of majors on campus and professions off campus. The dance troupe has a similar composition and has collaborated with the Arab Music Ensemble since its formation in 2006.

San Luis Obispo dance director Jenna Mitchell will lead the dance troupe in the performance of original choreographies that dialogue with the music. Habib, a composer, performer and ethnomusicologist, will direct the event. 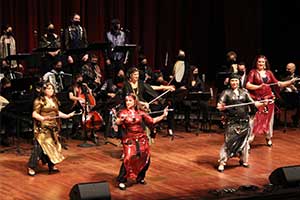 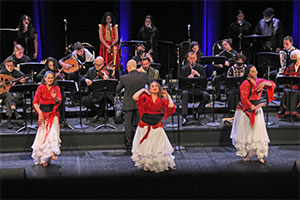