More information is on the free events page. 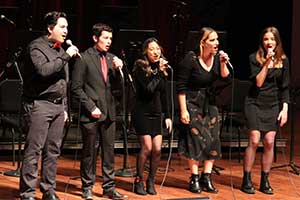 The concert featuring the Jazz Ensemble and Vocal Jazz Ensemble. It willcelebrate the digital release of the Vocal Jazz Ensemble’s new single, “Sunlight,” which is an arrangement by Cal Poly Director of Jazz Studies Arthur White of a tune by Esperanza Spalding. Music major and vocalist Danna Dumandan and Grammy award-winning drummer Gregg Bissonette are featured on the recording, and White performs the other instruments. The single will be available from streaming music services the week of May 23, and is part of a full album that is scheduled to be released in the fall.