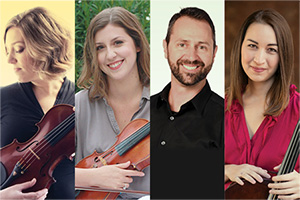 The Cal Poly Symphony and the Madrone String Quartet will present a collaborative season opener that features side-by-side performance, captivating chamber music, and Dvorak’s Symphony No. 9, “From the New World.”

Three of the quartet’s members — Emily Lanzone, violin; Mike Whitson, viola; and Laura Gaynon, cello — serve as applied faculty in the Music Department. With guest artist Valerie Berg-Johansen, violin, all four bring rich experience in performance and education to this collaboration. In addition to performing, the quartet will coach the students of the symphony in both orchestral and chamber music during the quartet’s residency.

Berg-Johansen grew up in a family devoted to violin pedagogy. While serving as a graduate teaching fellow with Eugene Symphony and the University of Oregon, she completed her doctorate in violin performance and violin and viola pedagogy. She teaches a full private studio in San Luis Obispo, performs often with local symphonies, and serves on the board of Redfish Music Festival.

Whitson has shared the stage with Itzakh Perlman, Yo-Yo Ma, Joshua Bell, Barbra Streisand, Stevie Wonder and many others. He is a regular studio musician, having performed on numerous movie scores such as "Pirates of the Caribbean,” "Despicable Me” and “The Lego Movie” and performs with numerous ensembles, including the Los Angeles Opera.

Gaynon has performed on both modern and baroque cello in concert halls across the Canada, China, Europe and the U.S. She has performed with the American Bach Soloists, the Oregon Bach Festival Orchestra, San Francisco Chamber Orchestra and with major artists. She has performed at numerous festivals including the Toronto Summer Music Festival and St. Lawrence String Quartet Seminar.

As part of its residency, the Madrone String Quartet will present a free Master Class on Dec. 1. 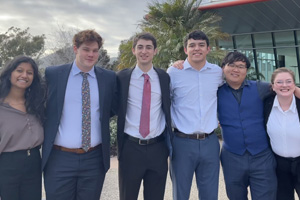 Featuring winners of the Cal Poly Symphony's Solo Competition. Come hear this year’s winners and celebrate musical talent from across the university. The orchestra will also explore Joe Hisaishi’s music from Studio Ghibli films, such as "Spirited Away," "Howl’s Moving Castle," "Kiki’s Delivery Service" and "My Neighbor Totoro." 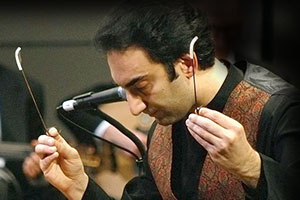 The first half of the program will feature works by Bahram Osqueezadeh, a multi-instrumentalist, scholar and composer. Osqueezadeh will perform his "Concerto for Santur and Orchestra" and guest vocalist Alireza Shahmohammadi will sing Osqueezadeh’s "Rational Insanity."

Osqueezadeh was the co-founder and director of the Drvak Institute of Music in Iran, as well as co-founder of the Drvak Ensemble.  As a soloist, composer and conductor, he has appeared on many radio and television programs in Iran and has toured the country, performing his original compositions.  He received the Gold Award at the Eighth Nationwide Fajr Music Festival and now serves on the faculty at UC Santa Barbara.

Shahmohammadi is recognized as one of today's renowned singers in Iran and a master of Persian classical music repertoires. He began his musical studies at the age of eight under the direction of his father and continued his studies with great masters such as Hatam Asgari Farahani, Mohammad-Reza Shajarian and Mohammad-Reza Lotfi. He recently presented a concert with the legendary Indian musician Pandit Swapan Chaudhure at Z Space in San Francisco. He has 15 published albums. “Majnoon,” his most recent, is a collaboration with Theodore Bikel and the Lian Ensemble.

After intermission, the orchestra will present Russian composer Rimsky-Korsakov’s "Scheherazade," an orchestral tour de force based on "One Thousand and One Nights." In this collection of Middle Eastern folk tales, and in the music, Scheherazade avoids death by entertaining her husband with tales of adventure and romance. Throughout, Rimsky-Korsakov evokes these tales with dazzling orchestral color and lyricism.